Our society celebrates Gerard Manley Hopkins, his poetry and his unique connection to our community in Monasterevin.  We hold an annual festival, and invite you to join us and gain an insight into the community and location that he referred to as “one of the props and struts of my existence”.

Confirmed speakers this year include Richard O’Rourke and Dan Carmody.
Our poetry reading will be given by Anni Wilton Jones.

We are pleased to announce the launch of the recordings of our 2021 festival where you can enjoy then at your leisure. 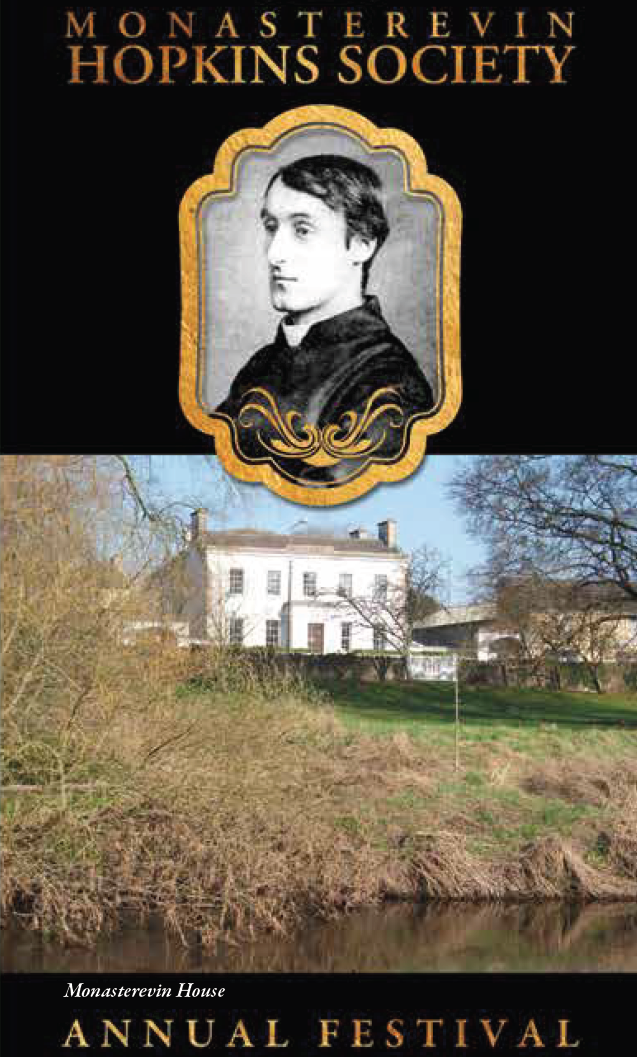 Hopkins as Traditionalist and Poetic Innovator: Lecture by Hilary Davies

In this lecture I will be looking at the extraordinary diversity of poetic forms and language upon which Hopkins drew to create what is a unique voice in English literature. Hopkins was a passionate linguist: a classicist by training ( he read Greats at Oxford)  but one who, unlike many of his similarly educated contemporaries, had no prejudices about what constituted ‘acceptable’ speech practice. This allowed him to range across multiple literatures and verse traditions to forge a poetic language that anticipates modernism and which remains today breathtaking in its daring.

Hilary Davies has published four collections of poetry from Enitharmon: the latest, Exile and the Kingdom, was published in November 2016. She is also a translator, essayist and critic: most recently, she has been a co-contributor to Yves Bonnefoy’s Collected Prose, (Carcanet, 2020) and is a co-editor of Prophetic Witness and the Reimagining of the World, (Routledge, 2020). Hilary has won an Eric Gregory award, been a Hawthornden Fellow, has served as Chairman of the Poetry Society of Great Britain and is a Fellow of the English Association.  From 2012 to 2016 she was a Royal Literary Fund Fellow at King’s College, London and in 2018-9 held the same post at the British Library.

Gerard Manley Hopkins and The Lydiate Connection: Illustrated Lecture by Will Daunt

Gerard Manley Hopkins’ poetry had an enormous influence on the evolution of twentieth century poetry in English, and two of his most distinctive poems were written while he was posted to the Jesuit church of St. Francis Xavier, in Liverpool in 1880-1881. ‘Felix Randal’ tells of the life and death of a parishioner that the poet had ministered to. ‘Spring and Fall’ was composed during one of Hopkins’ frequent visits to the village of Lydiate, where he was sent to say Mass at Rose Hill House.
This local guide reflects particularly on what might have inspired that poem: the countryside, the people and Hopkins’ own life. It follows the publication of Will Daunt’s related piece in The Hopkins Quarterly, Winter-Spring 2018 and includes specially-commissioned artwork by Susan Hodgkins. The book concludes with a local guided walk and an Afterword by the renowned Hopkins scholar, Professor Joseph Feeney S.J.

Will Daunt completed his schooling at the European School in Brussels in the very early days of Ireland and the U.K.’s membership of the E.U. Having studied English Literature at Reading University, he went on to spend his career in English state secondary schools, latterly as a headteacher.

After retiring, Will completed an M.A. in Creative Writing at Edge Hill University. These studies led indirectly to the submission to the Hopkins Quarterly of a piece called  ‘Hopkins in Lydiate and the Hinterland to ‘Spring and Fall”, which appeared in the Winter- Spring 2018 issue.

Edge Hill is a few miles from Lydiate and Will went on to write and edit the illustrated book,  Gerard Manley Hopkins: the Lydiate Connections.

Recently he has also edited two posthumous books of selected poems: Pleading at the Bar of Truth, by Eddie Wainwright, and Writing on Rock, by Tim Noble.

Six of Will’s poetry collections have been published, including three by Belfast’s Lapwing, and another which was an Indigo Dreams Collection winner. His work has appeared widely, most recently in Orbis, Envoi, Smoke, The High Window and The Poetry Village. He won first prize in the VER Poets’ 2009 competition and has been shortlisted or commended in competitions run by Poetry Nottingham, Envoi, Virginia Warbey, Sentinel, James Kirkup, Swale Life, The Poetry Kit, Southport Writers and Leaf.

Will has written reviews for Envoi, Pulsar, New Hope International, Tears In the Fence and Links.

Living in Lancashire, in the U.K., Will is currently working on a sequence of 100 poems of 100 syllables each. It’s called England’s Edging.

Proceeds from the sale of this book will be given to the Liverpool-based charity, Hospice Africa.

Gerard Manley Hopkins, S.J. (28 July 1844 – 8 June 1889) was an English poet, Roman Catholic convert, and a Jesuit priest, whose posthumous fame established him among the leading Victorian poets.  His experimental explorations in prosody (especially sprung rhythm) and his use of imagery established him as a daring innovator in a period of largely traditional verse.

Hopkins moved to Dublin in 1884 and died there in 1889.  During this time he was a professor of Greek and Latin at University College Dublin.  In letters to his mother and friend, English Poet Laureate Robert Bridges, he fondly mentions taking 6 or 7 short breaks at Monasterevin House with the Cassidy sisters commencing in 1886.  The Cassidy family were wealthy Catholic whiskey distillers.

The Annual Monasterevin Hopkins Festival is a celebration of Hopkins, his poetry and his connection with Monasterevin.  The program consists of poetry, literature, lectures, and music .  Please visit our Past Programs page for further information.

If you have any comments, suggestions or feedback, please feel free to contact us.